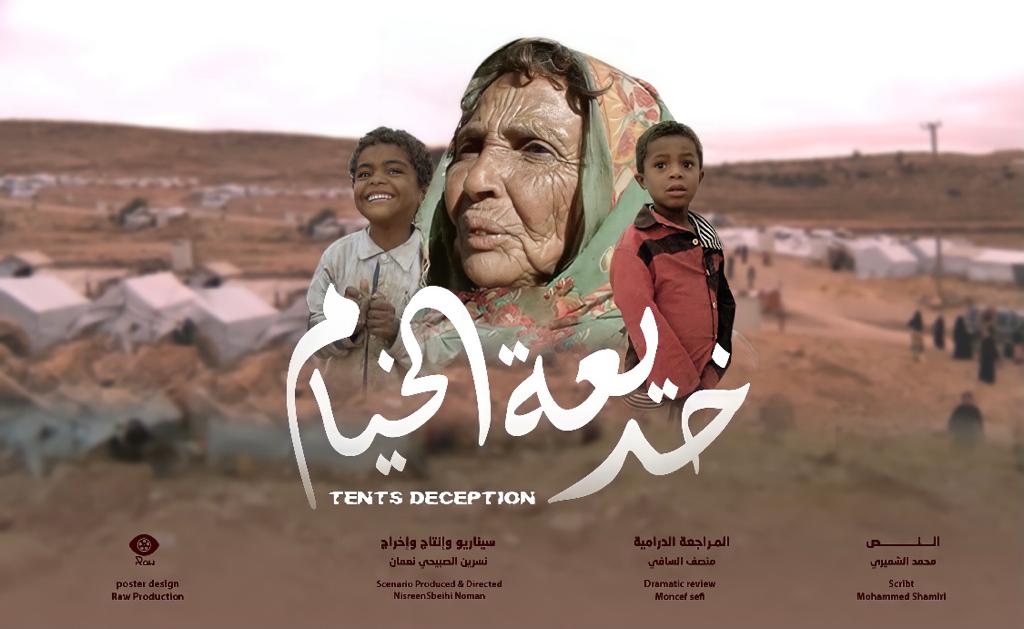 Tent Deception is a Yemeni investigatory documentary film. The preparation, montage, and film-making are in a different cinematic way. Filmmaker Nisreen Al Sbeihi has all intellectual rights of the 2022-produced film.

The film investigates and monitors the desperate plight of Yemeni Internally Displaced Persons (IDPs) in camps where they are coerced to live in. It documents the bitter moments of their lives as they have a life that is hard for anyone to imagine.

The starting point of the film was from rough terrains until it reached the devastated IDPs who fear that awaiting their plain dreams to come true may turn into a nightmare.

Filming Locations:
Even though it was difficult to reach many targeted areas, the camera of the film managed to arrive to different camps in large swaths of Yemen. The filming took place in several camps in Sana’a, Amran, Sa’dah, Ibb, Aljof, and Taiz. It also documented meetings with some active NGOs, such as the UNICEF. However, Oxfam Organization refused to have a meeting with the filmmaker who herself went to their offices.

The film documented the following:

– Harsh travelling conditions between Aden and Sana’a, especially the difficulties faced by travelers who are usually subjected to investigations, stalling, and improper treatment by checkpoints along the road.

– Hardship and security problems as well as obstructions of movement and filming imposed by the Houthi movement. (The Houthis are an armed-group backed by Iran who staged a coup against the internationally recognized government and took control of many governates and cities.)

– The story of some children in Darwan Camp whose innocent dreams have become a nightmare.

– The story of Mohammed, an elderly man who used to be a well-off merchant in Haradh, a town bordering Saudi Arabia, but then lost everything and became an IDP after the Houthis blew up his house and stores.

– The story of a child named Ali (an IDP from Sa’dah) which reveals how Houthis forcibly displaced many families.

– Food insecurity of IDPs who are faced with threats by residents near their Houthi-held camps where they are threatened to be killed or sacked from the camps if they talk about their humanitarian and financial aid being looted.

– The deteriorating health situation, the lack of basic services, and the weak presence and/or performance of NGOs, despite their efforts.

– Harassment faced by journalists in Houthi-held areas, especially when the journalist is a woman, e.g. the repeated threats the filmmaker faced while she was in Sa’dah.

– Risky adventures of IDPs in the port city of Hodeidah and how they are extorted by Houthi checkpoints.

– Climbing high mountains, together with people travelling to Taiz city, and going through rough terrains in Quradh area due to a six-year siege imposed by the Houthi movement which blocked the main vital road that links Taiz to Al-Hawban.

– The suffering of IDPs in Mocha town and Hodeidah who have complaints against INGOs’ workers as well as monitoring aid being sold in the black market.

– Monitoring the conditions of IDPs settling in some schools in Taiz and recording IDPs’ complaints against opportunists in charge of aid which is mostly controlled by a specific party. Besides the failure of the legitimate government to do its duty.

It was never easy to take upon this nerve-wracking, overwhelming responsibility. We, however, made a promise to deliver the message of the IDPs to the world and make their voice heard, for it may help improve their unbearable living conditions.

I usually prepare a summary for festivals, another for production companies, and a third for the various media. Sometimes the summary focuses on the political aspect, and sometimes it does not mention it at all. It only deals with the humanitarian aspect, according to the interests of the recipient of the summary.

How do you know the interior of the Arab homes residing here for tens of years and perhaps three generations, except by the chance of Arab students who are interested in this and become the link that communicates this information through films and gives everyone his right and does justice to the country that presented and still supports them and treats them exactly like its citizens without discrimination

In social psychology, the questions of passers-by on the street, interviews of all components of society are used and the government benefits in development, reform and bridging the gap. It also benefits researchers